It’s an experience like no other. Baslers and visitors agree, you either love it or hate it, but rarely anything in between. No, no, for better or worse, the Basler Fasnacht is something you’ll never forget.

I experienced it for the first time at fiftenn years old. I remember setting my alarm for the middle of a freezing February night. I wake up, catching the last few speeches of the Academy Awards as I layer in long johns, jeans, and sweaters. My sister cracks open the front windows, and already carnival-goers are streaming down our street.

We throw on our coats (with our ‘Blaggede’ pins buttoned on top to avoid being attacked by confetti!) and begin the trek toward Marktplatz, only a few blocks from our apartment — very helpful, since the tram and bus lines are packed. It’s cold, but somehow in the excitement of a citywide, midnight party with friends and strangers alike, Basel feels like it’s on fire.

And then waiting in the city centre, just as your hands and feet start to go numb, suddenly everything goes pitch black. It’s 4:00 a.m., Morgestraich, and Fasnacht has begun. It’s half dream, half nightmare as the insomnia, anticipation, and costumes all combine to create something at once wonderful and terrifying.

The music starts, at first distant and strange, and then louder and louder as the musicians come marching through the streets in all shapes and sizes with their colourful costumes and giant, oversized masks — some happy, some sad, anywhere from crazy, to cranky, to euphoric. The resounding boom of the drum and the shriek of the flutes echo off the cobblestones, and off the Rathaus and stone columns as the figures make their way through the streets, led by carnival floats and medieval-looking lanterns. And as the noise resonates around the city and Basel is engulfed in music and laughter, you find your friends and retreat to the nearest restaurant to warm yourself up with some traditional ‘Mahlsuppe’ (flour soup).

If you make it to Morgestraich this year, you’ll see that this is just the beginning. From 4:00 a.m. Monday to 4:00 a.m. Thursday, Basel is transformed. Work comes to a halt. And in the days that follow, you’ll find an endless celebration with unexpected parades, music, and mysterious masked carnival-goers throwing confetti and oranges.

You’ll run into people you know, and others you didn’t even know you knew. You’ll be out in the sun, and out in the rain, and up in the dark, and all the while walking on a growing carpet of coloured confetti. You’ll hear the traditional “Guggemusik,” bands playing a variety of both traditional and pop music…one of the few places on earth will you catch a rendition of Rod Stewart’s “Do Ya Think I’m Sexy” performed with trombone and tuba. You’ll see sheets of traditional Swiss rhymes and poetry littering the street. There will be humor and friends, and memories, and crowds and inconveniences, and of course, pickpockets. But you’ll never see anything like it anywhere else.

I still think about that very first Morgestraich. Everyone in town got sick after three straight days of carnival, but no one cared. And I’ll never forget that night. Now, when even our Swiss friends say they’ve never been to ‘Morgestraich’, we tell them they have to go at least once. With family and friends, it’s something that will stay with you for the rest of your life.

Click here fore more info from Basel Community about Fasnacht in Basel and its surroundings. 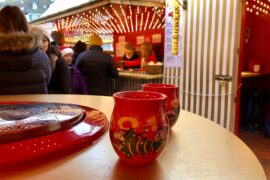 So This Is Christmas…