My wife Dorothy and I met during the summer of 2002 while she was visiting Washington state with her brother. I was introduced to her via my co-worker who had been friends with her family for many years. My co-worker and I worked for the Navy as civilians.

After her visit to the U.S., we kept in touch via emails and phone calls. I then visited her in Basel that Christmas for several weeks. It was great spend time there and meet her family and friends. She took me all over Basel, and we visited lots of other places in Switzerland. It is just a beautiful country!! As our feelings grew stronger for each other, it was getting harder to say good bye after each visit. Dorothy then visited me again three months later in Washington, and then we decided to get married. 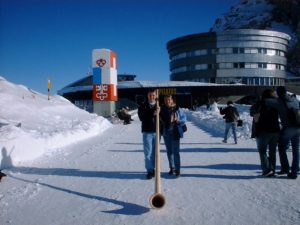 We were married in a small ceremony near the Munster on 24 June 2003. My parents and brother were able to attend and all of her family and friends were in attendance. After the ceremony, Dorothy organized a wonderful lunch in a beautiful garden. Later that evening, her sister hosted a beautiful dinner at her house. It was just the perfect day! 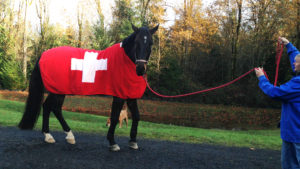 We now live in the Puget Sound area of Washington state. We have 2 beautiful dogs (Cosmo and Matilda) as well as two horses (Avatar and Rafiki). Dorothy loves her horses and likes to do jumping and dressage shows. I prefer bikes and love to ride whenever I can. 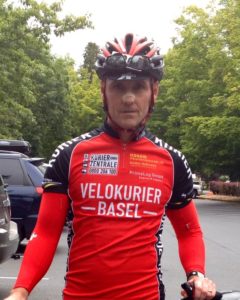 How did you find love in Basel? If you have a story to share, please let us know!

That may well be the first thing that jumps to mind when you look at how strategically Basel is situated. How much better can it get?

From Basel, thanks to an incredible transportation system (think car, train, plane, and boat) you can get anywhere in Europe…and the world. Not only does it have the Basel Bahnhof (Swiss Railway Station), but it also has the Basel Badischer Bahnhof (German Railway Station). If you’re really adventurous, you can bike or even walk to neighbouring countries!

Through years of tradition, the city of Basel finds itself divided by the river Rhine in two parts—Grossbasel (Great Basel) on the left bank, and Kleinbasel (Little Basel) on the right. Bridges and ferries link the two parts together. Years ago, as lore has it, the Lällekönig (literally “Tongue King”) on the Grossbasel side would stick his tongue out at the “lower” people of Kleinbasel. In return, the “lower” people would…well, turn their backs to him! Check on the Grossbasel side of the Mittlere Rheinbrücke and you’ll see a bust of the Lällekönig with his tongue sticking out.

Rich in history, in AD 374 Basel grew from a Roman military camp, Basilia, associated with the Roman colony of Augusta Raurica (now Augst). However, recent finds of Celtic settlements predate the Roman castle.

Later, Basel became the seat of a bishop and was ruled by prince-bishops. In 1019, the German Emperor Heinrich II began building the famous Basel cathedral known as the Münster.

An earthquake in 1356 brought a massive amount of destruction to the city. In 1500, the construction of the Basel Münster was finished and Basel became the eleventh canton to join the Swiss Confederation in 1501. At the start of the Reformation in 1529, Basel became a refuge for victims of religious persecution and contributed to Basel’s golden age in the 18th century.

Basel is home to many international fairs (Messen) and fun activities. It also is home to leading pharmaceutical companies as well as banks and bankers’ banks! The University of Basel is the oldest university in Switzerland founded in AD 1460. Erasmus taught at the university and is buried at the Münster.

Baseldytsch, Basel German, is the way native locals communicate. They also speak German, French, and English. In fact, it’s becoming very common to find English spoken in many places around the city. Many locals will prefer to communicate with you in English than in “high German,” proper German, or French.